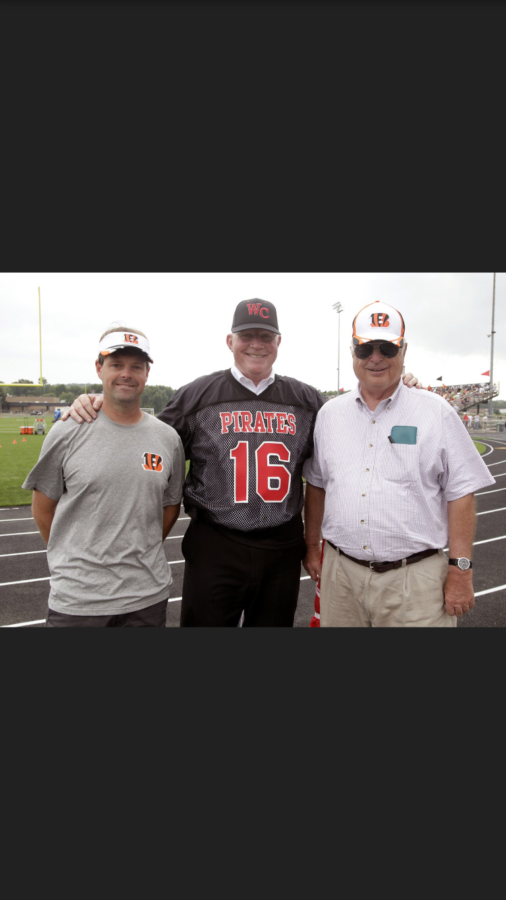 Dr. Clifford with his grandson Paul (right) and Mike Brown (left), the manager of the Cincinnati Bengals at the Bengals practice held here at WCHS.

Though Dr. Rusty Clifford’s final months as our superintendent approach, that does not mean that WCHS will be seeing the last of him.

“I use the word resign, not retire” Dr. Clifford, who has been superintendent of West Carrollton Schools since 1999, said of his decision.

“It’s just time,” Dr. Clifford said of his decision to resign at the end of this school year. With things going so well here at WCHS and an easy opening for a transition for someone else to take over, he decided that now is the perfect time.

Dr. Clifford has had 45 great years in education, as an educator, a principal, a coach and our superintendent. Dr. Clifford is also the founder of the Youth Leadership Board, which is now being led by principal Mr. Craig Myers and Mr. Doug Mescher, the middle school principal.

Mr. Myers has worked with Dr. Clifford for eleven years and has amazing things to say about Dr. Clifford. “He has always been extremely positive,” Mr. Myers said, “he’s always trying to pick the right ideas to better our district.”

Dr. Clifford looks for to many more years doing something in the education field; however, he’s not quite sure what that something is at the moment.

Another uncertainty is who will be fulfilling his position, but the application process is in progress.

Looking back Dr.Clifford’s favorite memories and times here at WCHS, all involve our community. When asked about his favorite memories with students he simply left it at “multiple pies in the face.” As for the staff, he said the relationships he’s built with everyone.

Dr. Clifford gives thanks to his entire staff, but gives a big shout out to the Board of Education. “They are role models for what a Board should look like,” Dr. Clifford said. And when asked about accomplishments, he said all of them belong to the district. Thanks to everything the district does, we received an excellent on our district’s state report card in 2011, and just passed our fourth levy in November.

“Every year we get a little bit better, and that would be what I would like to see continue after I leave.”