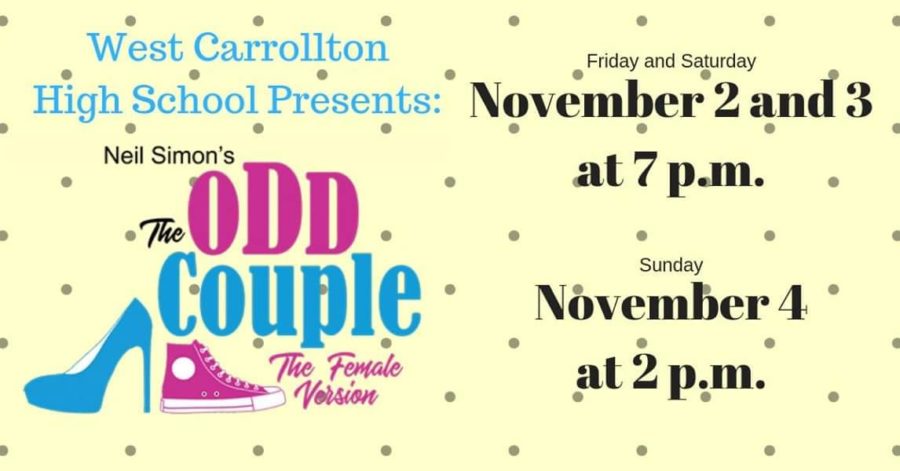 The production, which stars a cast of our very own WCHS students, will run through this weekend in the auditorium at WCHS. The cast has worked hard with many after school rehearsals and they are hoping for a success to further improve and bring attention to the skill in the theatre program.

“Best comedy I’ve ever seen,” said sophomore Anna Howard of the production. This is the fifth production Howard has been in, and with such a glowing analysis of “The Odd Couple,” one can only be excited for the debut.The play was described by the cast as a comedy rooted in the dichotomy between the two main characters: Olive Madison, played by junior Bri White and Florence Unger, played by senior Jessie Boehmer.

When director, Mrs. McGuff, was asked what made this play stand out compared to other productions she answered “This play is showing off our female students’ acting skills. It is historically set in the 80s, pushing us to make some interesting choices for costuming and set.”

“The Odd Couple” was originally written as a primarily male play with limited female characters. However, WCHS has decided to do the alternate version which is an all-girl cast excluding the two

Spanish twins who are played by sophomore Brady Moore and junior Jordan Jergens. Moore feels as though the play has lost some of the charm and magic that made his first production, “Brothers Grimm Spectaculathon,” so enjoyable. However, the cast feels overwhelming positive about the quality of acting, the organization in all aspects, and their levels of preparedness in regards to the production’s debut.

The black sheep in all of this is the in-school preview of “The Odd Couple.” After last year’s audience performance, the directors are skeptical to do another preview. For those unaware of what happened at last year’s preview, the audience was loud and disrespectful to the cast as they tried to perform for them.

The overall sentiment from the cast in regards to the audience behavior is as follows- Please be respectful and quiet, we have put many hours into rehearsing this and the least you can do is watch us in a respectful manner.

Note: This article originally listed White playing the part of Unger and Boehmer as Madison. It has been revised and now lists the correct casting for the two leads.