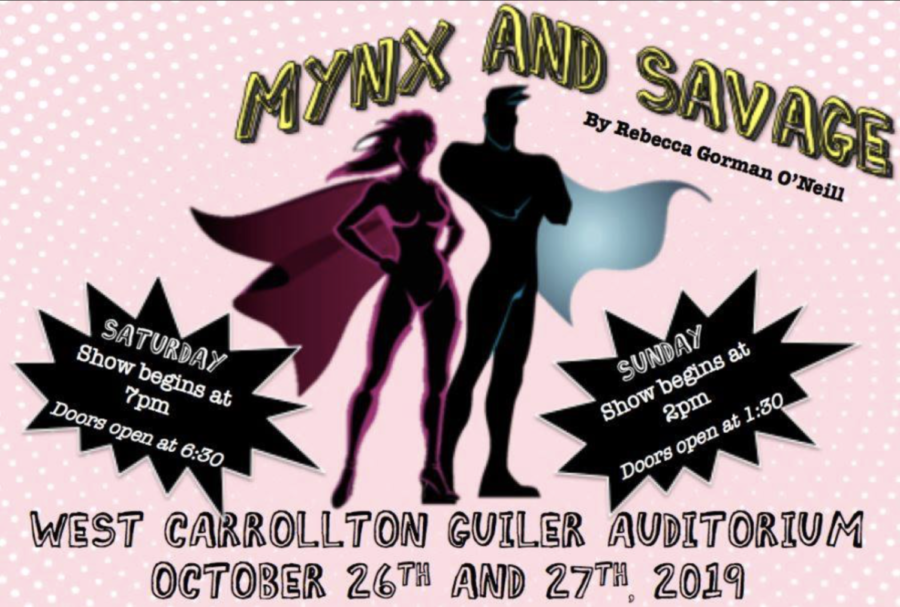 This year’s fall play is a production of “Mynx and Savage,” a dark comedy about writers of a graphic novel. The WCHS community will have two opportunities to see a performance: Saturday, Oct. 26 at 7 p.m. and Sunday, Oct. 27 at 2 p.m. in the Guiler Auditorium. Student admission is $5 and $7 is for general audience.

Director Mrs. Nicole Ingram said that she and Ms. Emily McGuff started co-directing the fall play 5 years ago. Mrs. Ingram said that when Ms. McGuff was hired at WCHS, she had never directed when hired, she had only acted in plays. “So I said I would help her for a year, and now it’s year five or seven, and we’re still doing it,” said Mrs. Ingram, “I keep saying that it’s going to be my last year, but I keep doing it because we have outstanding kids.” Mrs. Ingram then mentions how senior Cece Race is an example of a student who has made great progress.

“She’s just amazing,” said Mrs. Ingram, “And she’s not the only one. I can’t talk about every single person, or it would be really, really long,” added Mrs. Ingram.

With Mrs. Ingram’s and Ms. McGuff’s positive influence, WCHS actors enjoy participating in the play. However, the majority of WCHS students don’t know the complications that go on behind the curtains.
Although auditions have ended, sophomore Natayah Vanderpool spoke about casting issues that were experienced by cast members, Mrs. Ingram and Ms. McGuff.

Mrs. McGuff and Mrs. Ingram said they plan to promote the fall play personally in the future and next year’s auditions will be scheduled later in the year.

Mrs. Ingram does agree that casting issues makes directing difficult sometimes, but she also spoke about more complications such as only some students attending the play. Mrs. Ingram said that not as many people come to see the play compared to the musical because the musical is a much bigger production.

However, Mrs. Ingram said that seeing the growth of her students makes any complications or difficulties worth it.
Many members in the play are very dedicated to what they’re creating – even after minor setbacks. Both Mrs. Ingram and Ms. McGuff are very passionate about making this year’s play a success no matter what and Mrs. Ingram plans to keep advising the play with Ms. McGuff.